The existence of gravitational waves –ripples in the fabric of space-time– were predicted by Albert Einstein in 1916. After decades of painstaking technological improvements these waves were first observed in 2015 by the two LIGO interferometers in the USA and presented in the by now iconic and Nobel Prize winning illustration above. This event was traced back to the merger of two massive black holes into a single black hole. Since 2015 many (>50) events have been observed, with the most spectacular one a signal from the merger of two neutron stars, recorded in 2017 jointly by the two LIGO detectors and the Virgo detector in Italy near Pisa. This merger of two massive blobs of ‘normal matter’ was subsequently observed all across the electro-magnetic spectrum by numerous telescopes and established gravitational waves as a core ingredient in the new field of multi-messenger astronomy and as an entirely new way to ‘listen’ to the Universe. 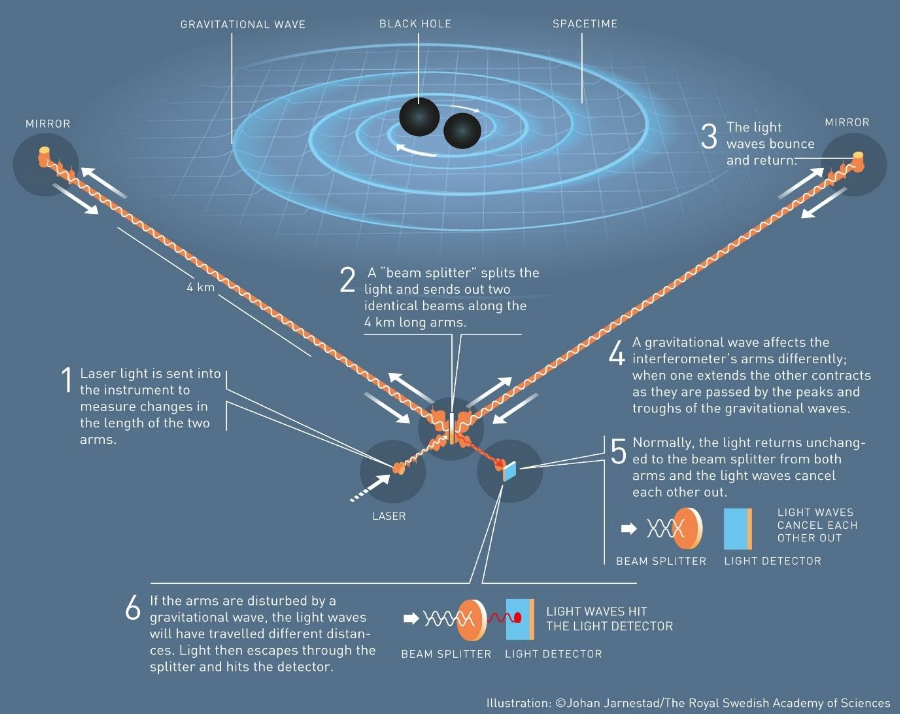 The gravitational-waves detection principle is in essence very simple and based on the Michelson interferometer. This device is a perfect match to the signature of a gravitational wave which extends the length of one arm while it contracts the length of the other arm and vice-versa affecting the interference pattern of the two merged beams after they traveled up and down the laser-interferometer arms. This is observed as a brief flicker of light at the output port (photodiode light detector) as detailed in the illustration. In reality a gravitational-waves observatory is an extremely sensitive high-tech infrastructure capable to detect relative length changes between the two 3 (Virgo) or 4 (LIGO) km long arms as small as 0,000 000 0000 000 000 001 meter i.e. ten thousand times smaller than the proton diameter. To do so requires mind boggling technologies.

Nikhef physicists, engineers and technicians are deeply involved in many aspects of gravitational-waves detection not only for the Virgo observatory (see https://www.virgo-gw.eu/), but also for the ETpathfinder laser interferometer R&D laboratory: https://www.einsteintelescope.nl/etpathfinder/ being built in Maastricht in preparation for the next generation gravitational-waves observatory Einstein Telescope (ET): https://www.einsteintelescope.nl/ and for the future LISA gravitational-waves mission in space: https://www.elisascience.org/. We work, for example, on the characterization and improvement of the Virgo instruments. We design and develop new elaborate vibration attenuations systems (fabulous classical mechanics i.e. coupled pendula etc.), vibration-free cryogenics to allow eventually to cool interferometer mirrors to 10-20 K, and innovative photodetectors for LISA. We design and shape future detectors, with a focus on modern control systems and on optical simulation and design (classic laser optics with a quantum optics twist). Another Nikhef group, the one at Utrecht University, is deeply involved in the so-called ‘pipelines’ to identify gravitational-wave events in the continuous output stream (while taking data) of the Virgo observatory as well as in the analysis of these observations.