Observations of the gamma-ray radiation from the Galactic center region with the Fermi Large Area Telescope have revealed a mysterious diffuse and extended emission. Discovered almost 10 years ago, this emission generated a lot of excitement in the particle physics community, since it had all the characteristics of a long-sought-after signal from the self-annihilation of dark matter particles in the inner Galaxy. Finding such a signal would confirm that dark matter, a substance that so far has only been observed through its gravitational effects on other objects, is made out of new fundamental particles. Moreover, it would help to determine the mass and other properties of these elusive dark matter particles. However, recent studies show that arguably the best astrophysical interpretation of the excess emission is a new population in the Galactic bulge of thousands of rapidly spinning neutron stars called millisecond pulsars, which have escaped observations at other frequencies up to now. 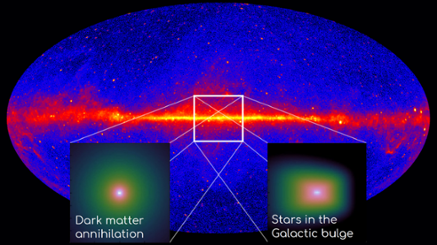 Figure 1. Observed gamma-ray emission from the Galactic disk, with the bulge region indicated. The insets show the expected profiles of excess radiation coming from dark matter and stars respectively. The researchers were able to show that the stars profile matches the measurements much better than the dark matter profile.

Where there are stars, there is radiation

‘Understanding in detail the morphology [the location and shape] and spectrum [the combined frequencies] of the excess emission is of vital importance for discriminating between the dark matter and astrophysical interpretations of the Galactic Center excess radiation.’, says Christoph Weniger, one of the researchers that conducted the study. A new study by researchers at the University of Amsterdam and the Laboratoire d’Annecy-le-Vieux de Physique Théorique, a research unit of the French Centre National de la Recherche Scientifique, found strong evidence that the emission actually seems to come from regions where there is also a large amount of stellar mass in the Galactic bulge (the ‘boxy bulge’) and center (the ‘nuclear bulge’). Furthermore, the researchers found that the light-to-mass ratio in the Galactic bulge and center are mutually consistent, so that the gamma-ray GeV emission is a surprisingly accurate tracer of stellar mass in the inner Galaxy – see figure 2. This study was based on a new analysis tool, SkyFACT (Sky Factorization with Adaptive Constrained Templates), developed by the researchers themselves, which combines physical modeling with image analysis. 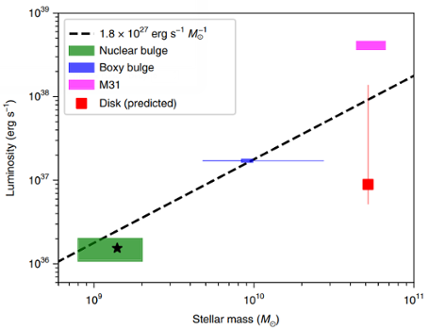 Figure 2. Comparison of the stellar mass (horizontal axis) and gamma-ray luminosity (vertical axis) for the “boxy bulge” (in blue) and for the “nuclear bulge” (in green). The prediction for a population of millisecond pulsars in the Galactic disk (in red) and the bulge of the nearby Andromeda galaxy (M31, in pink) are also shown. Stellar mass and luminosity are proportional to each other in the inner Galaxy (dashed line), which shows that the mysterious excess radiation very likely has a stellar origin and is not coming from dark matter.

The findings support the millisecond pulsar interpretation of the excess emission, since neither a dark matter signal nor other astrophysical interpretations are expected to show such a correlation. ‘The results will help guide upcoming radio searches for this hidden population of millisecond pulsars in the Galactic bulge with MeerKAT and the future Square Kilometre Array’, said Francesca Calore, another of the paper’s authors. ‘This makes these upcoming searches even more promising.’